Like our work? Arrange a meeting with us at our office, We'll be happy to work with you!

We are always looking for new talents and we were expecting you. Time to apply, buddy!

The 2016 election has shaken up the USA as well as the world. The so-coined “Trumponomics” are bound to have an impact in 2017 and beyond. At the request of our clients – all of them foreign-owned companies seeking to invest in green field manufacturing operations in the USA – we aim at providing an overview of what the implications of Mr. Trump’s known policies might be.

“Trumponomics” are bound to have an impact in 2017 and beyond. We aim at providing an overview of what the implications of the known policies might be.

President-elect Trump was not particularly forthcoming on details about his economic policy plans on the campaign trail, so that there are still many unknowns as to what the Trump administration’s economic policies will look like. Some themes however are consistent and recurring. Under the prevalent anti-globalization and “America First” themes of Mr. Trump’s campaign platform, the President-elect is expected to cut taxes, invest in public infrastructure, homeland security and defense spending, re-regulate the finance and energy sector, withdraw from negotiations of multilateral free trade agreements and instead focus on bilateral trade agreements, and introduce protectionist trade measures such as punitive tariffs.

“My agenda will be based on a simple core principle: putting America first. Whether it’s producing steel, building cars, or curing diseases. I want the next generation of production and innovation to happen right here, on our great homeland America. Creating wealth and jobs for American workers.” 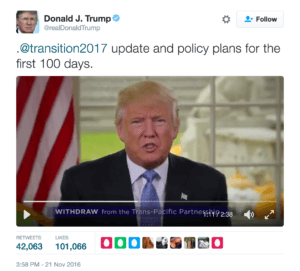 Mr. Trump has repeatedly promised to bring down the top marginal individual income-tax rate from 39.6% to 33%, reduce the corporate tax rate from currently 35% to 15%, cut rates on capital gains, and repeal federal inheritance and gift taxes. In terms of business taxes, foreign subsidiaries of U.S. companies will be asked to pay up to 10% repatriation tax, payable over 10 years, on accumulated profits held abroad at the date of the proposal. Future profits generated by foreign subsidiaries of U.S. companies will be taxed each year just as they are earned. An analysis done by the Tax Policy Center, a non-partisan think tank, suggests that Mr. Trump’s tax plans would reduce the annual federal-tax revenue by about 4% of U.S. GDP.

That said, the OECD, just like many economists and political observers, expects that these dramatic tax reforms, combined with increased federal spending, such as a $550bn planned (some sources say $1tr) investment in public infrastructure, are likely to serve as a stimulus package in the short run, that is the years 2017 and 2018. The proposed policies are expected to spur U.S. economic growth rates beyond 2.5% p.a. and reduce unemployment.

Re-regulating parts of the finance and energy sector could very well mean deregulation. Some industries such as fossil-fuel companies are likely to emerge with more leeway than under the current Obama administration. While this again may be good news for companies and consumers alike in the short-run, it would also represent a step backwards from what the world community has achieved concerning the reduction of global emissions in the past years.

“Tax cuts and increased spending will inevitably lead to higher public debt.” “Higher interest rates will translate into much higher interest payments – which in turn will eventually require higher taxes to fund them. As a result, the combination of loose fiscal and tight monetary policy may simply be self-defeating.”

Mr. Trump’s stance on trade agreements is among the clearer cornerstones of his economic policy plans. While he has made it clear that the World Trade Organization appears to be a manifestation of the world community exploiting the USA, he also wants to terminate negotiations regarding the Trans-Pacific-Partnership (TPP) on “Day One” of his Presidency. This could leave a void waiting to be filled by China’s “Regional Comprehensive Economic Partnership” initiative. It is unclear what the President-Elect’s hostile position means for NAFTA, but it seems unlikely that discussions about new deals will be opened and TTIP negotiations be successfully continued. Instead of multilateral trade agreements, Mr. Trump seems to focus on bilateral trade agreements instead, though details are unknown at this point.

In order to protect U.S. industries, Mr. Trump has further proposed and would be in the position to unilaterally impose punitive tariffs of 45% on Chinese and 35% on Mexican products. This of course would make the USA vulnerable to retaliatory measures from other governments, which in turn could also hurt U.S. companies that depend on international supply chains. While some observers expect these measures to have a negative effect on the U.S. economy in the mid-term, economic researchers, such as the Ifo Institute [3,4], warn about the global consequences of such protectionism that could lead to a global downward spiral of protectionist measures.

Overall, current leading opinion seems to be that while Mr. Trump’s economic policy plans may stimulate short-term growth, in the mid-term these benefits could quickly be offset. Just as tax cuts and increased fiscal spending highly impact the debt-to-GDP ratio and leave the U.S. government with a much larger annual budget deficit, inflation is expected to rise [3,5].

“Most tariffs backfire, hurting the country that imposes them by raising prices, blunting competition and depriving consumers of choice.”

Macroeconomic policy is expected to support that development and as a consequence, the Federal Funds Rate (currently still at 0.500%) is expected rise to levels between 1.25% and 2% at the end of 2017. And just as open seats on the Fed’s governing body are waiting to be filled, this development is seen to inspire a more restrictive monetary policy. In addition, the value of the US-Dollar (it has already gained value since the election) would likely soar due to higher interest rates. While this could be good news to international exporters, U.S. manufacturers would surely suffer from this development. The Mexican Peso, for example, has already lost value against the US-Dollar, increasing the competitiveness of Mexican-based companies (at least for as long as NAFTA remains intact). Furthermore, this development could potentially impact transfer pricing by multinationals and the status of foreign-held bonds.

Even with an all-Republican Congress during the course of the legislative process, many of Mr. Trump’s promises can be expected to be softened, as suggested for example by the Republican’s wary reaction to the proposed increases in infrastructure spending. This means that certain demands might still be implemented but not on such a high level.

But it is the uncertainty and not knowing that concern potential international investors and should concern the future President and U.S. leadership as well. Uncertainty fuels the loss of trust, which can be detrimental to attracting FDI as trust has a significantly strong relationship to economic growth [e.g. 7-10]. And although Wall Street has so far reacted surprisingly modestly to the currently vague policy outlook, University of Oxford researchers Ortiz-Ospina and Roser [7] found in a  2016 study that trust in the U.S. federal government has steadily decreased and is at historically low levels. 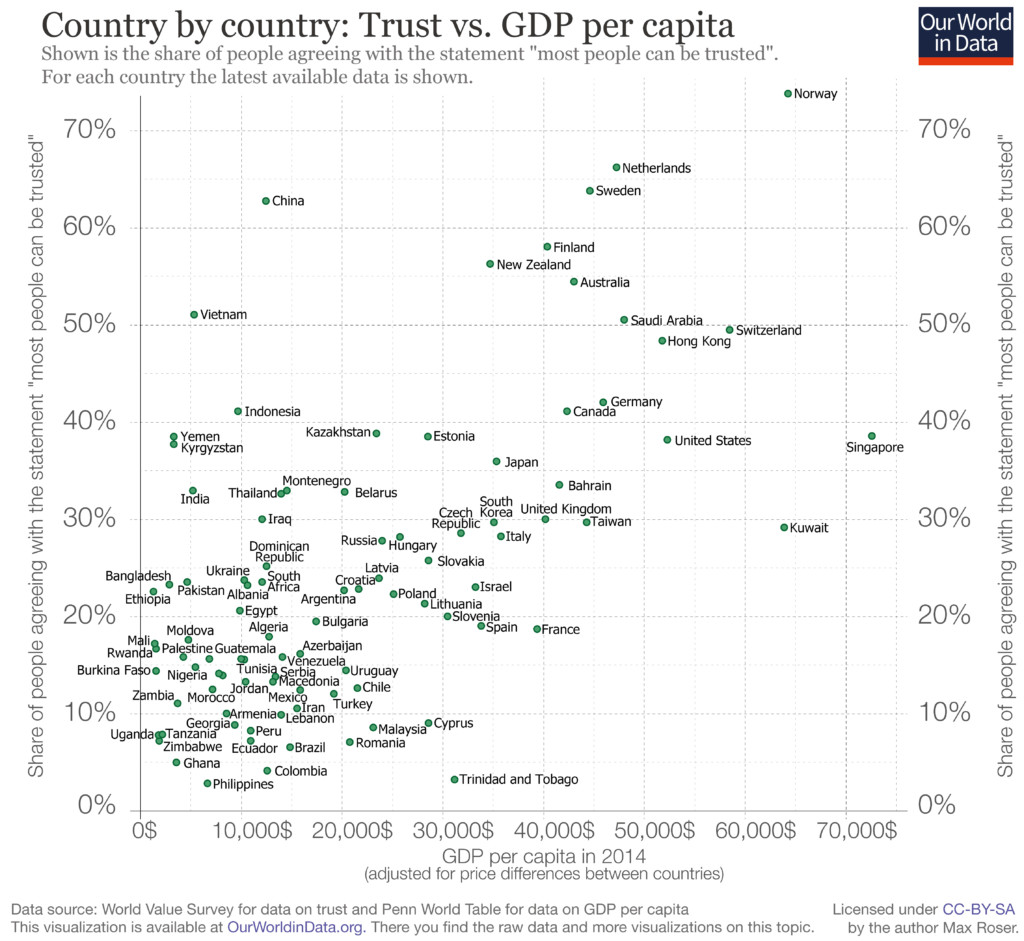 However, one can only hope that Mr. Trump and his transition team will quickly shed some light on the direction they want to take the country. They would be wise not to ignore the voices of opposition and critics that foresee the current policy plans to spark growth in the short-term but to stifle economic growth in the mid-run.

A topic that seems to be missing in the conversation is workforce education and training as two integral themes of economic and education policy. This stands out particularly, when we compare the proposed policies to Marco Rubio’s infamous “We need welders, not philosophers” statement early on during the GOP campaign, that got tremendous media attention [12]. We do not want to go into the details about the meaning of this statement, nevertheless, we certainly believe that good technical apprenticeships and vocational training are crucial.

Businesses are concerned with acquiring, developing and maintaining a qualified workforce. Always. It’s called human resources for a reason. In fact, when conducting site selection or market entry research, it is one of the most important (for many, the most important) criteria.

“European executives are laser-focused on the local workforce quality and availability.”

What we see from our work with local communities, education providers such as community and technical colleges and local businesses, is a high degree of best-practice collaboration and workforce development that could inspire policies. The solutions are already there but would require scaling. Furthermore, current plans under the designated education secretary, DeVos, encourage school choice, but feature mostly private and charter schools [11].

What is also missing from the current debate(s): not every state is the same. From education and taxation to environmental policies (e.g. California), U.S. states have some significant power, not only through varying laws and regulations. Policies by the new Trump administration are set at the highest level (federal), but states will likely have their own take on it.

With all eyes on the Transition 2017, one must also not forget the weight of business investment itself – apart from all policy implications. Innovative U.S. businesses (for instance clean-energy firms like Tesla) will do their utmost to not fall behind in the world, especially if Europe and China are pressing ahead. It’s the commercial self-interest of companies, that certainly also holds true for transatlantic FDI. 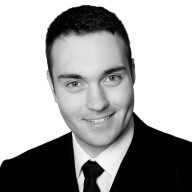